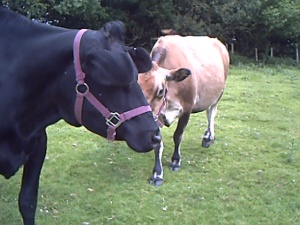 It has been a few years now since we lost our house cows as TB reactors and they have been sorely missed. We have not been completely without cattle in that time, but none of whom have worked out as a bomb-proof provider of the household milk that we need.

The plan has always been to get another cow and after several failed attempts we decided to go right back to the start and go through what it was we need from a cow: a small breed of cow that does well on rough grazing, something hardy that can live out all year and a young calf who could fit into the family and our set-up right from the start.

To begin with I was very set on a Jersey or Jersey-cross as that is what worked so well for us in the past. There is something special about Jerseys too; the shape, feel and sound of them somehow added to the ‘real cow’ feel to me. However they don’t really meet all the requirements we have as they are not the hardest of breeds and don’t do so well on poorer grazing. Also for me personally the milk from pure breed Jerseys is too rich and so I can only drink it once it has been skimmed or cooked.

Dexters seem like the obvious breed meeting our needs but having had three different heifers plus followers since we started keeping cattle in 2001 I have come to hate the breed; they have an un-tame streak in them that makes them difficult to manage and seem to escape from anywhere and everywhere whenever they see fit (three or four times a day at one point when we had our first mother and daughter team). Perhaps one hand reared from a calf would be different but I felt I wouldn’t have the same enthusiasm for a Dexter calf as other breeds.

After mother researched a few breeds (I was still set on a Jersey calf at this point) she came across shetlands; who fitted all our needs being small, hardy and ‘the original house cow’ although nowadays are mostly kept for meat. So I was convinced to go and see a herd who had some six month calves for sale. 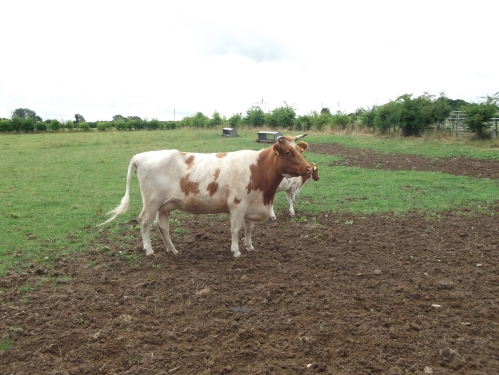 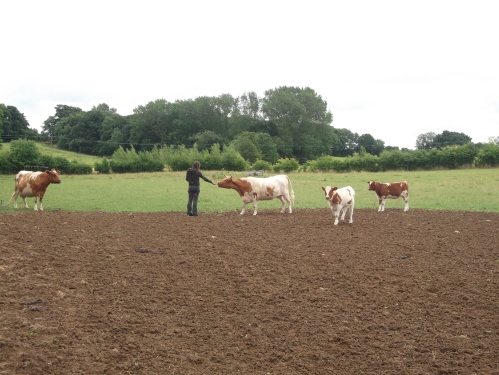 When we came away we agreed that Shetlands seemed right, although the ones we had visited weren’t the right ones for us.

Shetlands were originally classed as a dairy breed grazing in the harsh environment of the Shetland Isles were they developed as a breed on the isolated islands to provide milk for the Crofters even from it’s poor grazing and pasture land.  Shetlands became a duel-purpose breed when breeders where encouraged to cross them with meater breeds, and after the second world war the Government denied subsidies to breeders unless they were crossed with bigger cattle which caused the breed to become classed as ‘critically endangered’ in 1981 by The Rare Breed Survival Trust when little more than 100 pure bred cows and bulls could be found. Shetland Cattle are now kept mostly on the mainland and have crept up the The Rare Breeds Survival Trust’s  watched list to ‘at risk’ meaning there are 450 – 750 pure breed cattle that are known about.

We wanted a young calf to bottle feed, ideally about six weeks old however possibly as old as three months if nothing younger was available. Although Shetlands are a duel-purpose breed many breeder keep them as a meat breed as the tie of milking is too much for many people, this is something we have found with other cattle breeds and goats too.

After some searching we were pointed towards Epicure’s Larder who have a small herd of Shetlands (or possibly not now as they were moving to New Zealand) for cheese making. After contacting the herd owner they seemed like the prefect place and so an order was put in for a calf if a suitable one came up this spring.

At the end of March I got an email saying that two heifers had been born, and so a day trip to Yorkshire was arranged for the end of April. When the day arrived we hired a van and set off early, the drive took a good while with lots of road works. When we got there we made the final choice between the two calves opting for the ‘friendly and milkier’ breeding of the two. 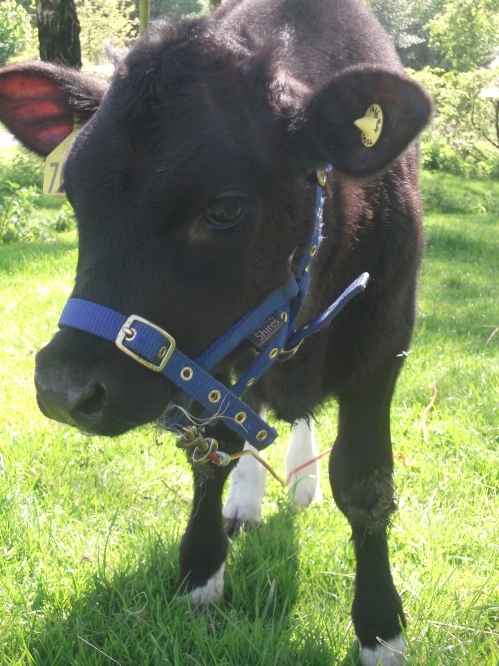 After a day settling in we taught Bridie about bottles, something she picked up very quickly although we did need to use a lamb bottle with a softer teat for the first few feeds until she’d got the idea. Then a few days later she learnt about leading reins and then being tethering on the green outside and being brushed.

Bridie is very good about everything and takes everything in her stride, just what we’d wanted! 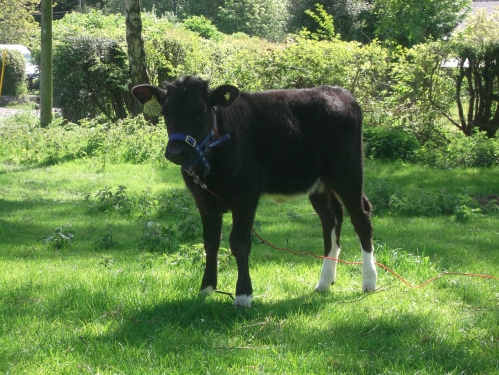 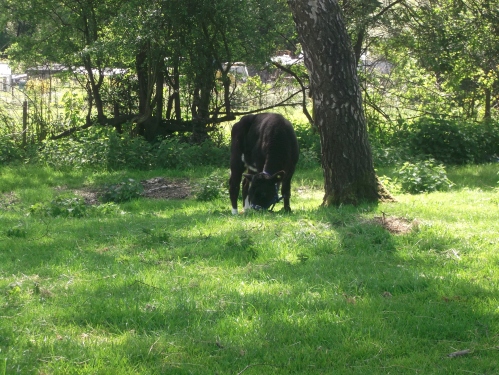 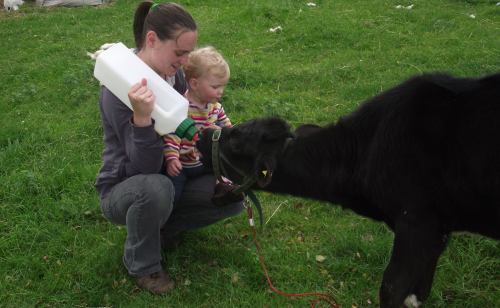