The veg garden has undergone a redesign during the early part of this year. Partly prompted by the back log of deep bedded houses to clean out and partly so as it is easier to manage with more defined growing areas and straighter, wheelbarrow friendly paths. 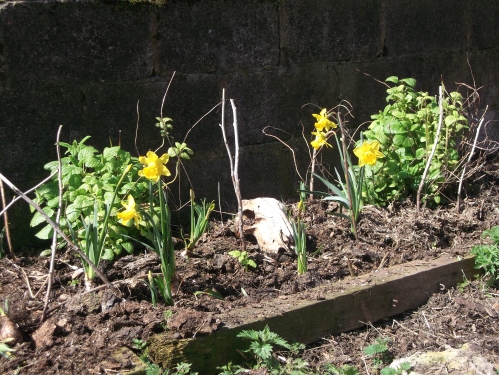 Raspberry bed with sheep sulk decoration. Extra yellow raspberry canes were added to the bed early in the year and a bag of daffodils to add some spring colour to the vegetable garden ~ April 2014

There is still some work to do including some refencing, the clearing of an area and the erecting of a small polytunnel we bought seconded-hand a few years ago and the clearing and reskinning of the 30ft polytunnel we bought with us when we moved from Herefordshire some 20 years-ago but we now seem to have a much clearer vision of what the end result should look like.

Seed sowing began last month and has reached the stage of the bath and shower being filled each night with plants that are spending their days outside and the windowsills have been filled with second or third loads of trays, modules and root trainers. This year the focus has been on using what we already have in readiness to buy ‘pure’ seeds; moving away from large brightly packed seeds from multinational companies with no ethical code or care for if the seeds are suited to back garden growing to plainer packets from small UK based seed companies and handwritten notes from people with a passion for what they growing. 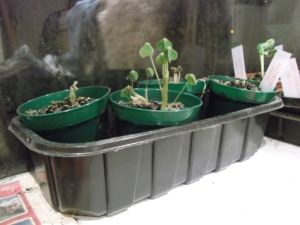 Oca starting off inside; these plants have such lovely leaves at this age ~ April 2014

Of course new seeds have been aquired; ‘at the till’ packets have been impulsivly bought, seed swaps have been attended and a few carefully selected packs have been picked out. The most noteable of these being Oca tubes from a seed swap, a plant which I have been wanting to try for a few years and Pumpkin Nut squash which I tracked down after reading about them on The Snail of Happiness’s blog last year. How they shelled the pumpkin seeds for eating had been something I had been pondering for a while and this provided the answerer!

Germation rates have been hit and miss as some of the seed is so old, some of it with sow by dates dating back to the early 2000’s from my dad’s boxes of seeds, and I haven’t been really keeping a record of what and how much has come up instead tipping half or whole packets into pots and seeing what happens.

I haven’t kept complete records of what has been sown either as I only started in March and had already sown some tomatos and started off onion sets in pots by then but from then it is roughly as follows. 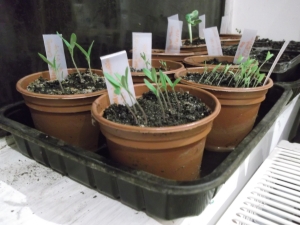 My chickens have been providing a more balanced end to the slugs and snail collecting I have done, using them as a tasty treat feels a more comfortable disposal than the dilemma I was faced with before

This entry was posted in garden and tagged garden, growing, seed sowing, seeds. Bookmark the permalink.