I have been doing a lot of cooking lately; it started off with apples and has gone on to trying and retrying other baked goodies.

I’ve made hobnob biscuits before, originally from a recipe found on the Creative Living Forum but since have googled it and found it in a few places, including a few vegan ones. They are very easy and do taste like the ‘real thing’. I have been experimenting with cooking them in a few different ways but the basics are this:

Method: Mix the flour, sugar, oats and bic soda (I don’t always remember the last of these and can’t say that I’ve personally noticed the difference) in a large bowl. Melt the margarine and honey along with the hot water, I do this over a pan of boiling water and then add this to the flour, sugar and oats and mix well. Whenever I see the melted mixture I always think that it isn’t possibly going to be enough but once it is in with the rest and you start mixing it is always enough.

Whilst you make the mixture pre-heat the oven to 180 Degrees C, I normally cook them when I have the oven on for something else but have found that they don’t work as well if the oven is too much higher than this so I just cook everything else at this temperature, roast potatoes aren’t that fussy after all. If you do have to cook something else higher than keep a very close eye on the biscuits.

Grease a/some baking trays and mould the mixture into biscuit shapes just a tiny bit bigger than a two pence piece and place on a tray remembering to leave room for them to grow. It is much easier to shape the mixture whilst the margarine and honey are still warm. 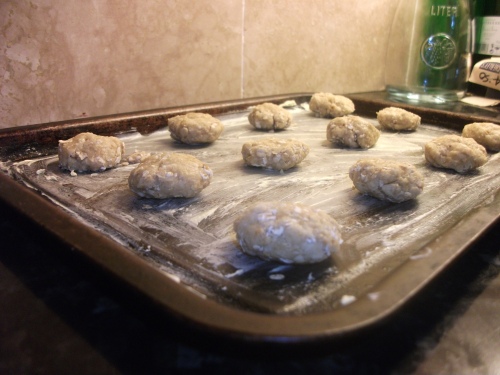 Place the trays into the oven (with the biscuits on!) and wait until golden brown which takes roughly 10 – 15 minutes. When the biscuits are done they seem to stay a little soft and have a not-completely-cooked feel about them but are and will harden up once they are out of the oven and cooled so it is the colour you are looking for to tell if they are done or not. If you take them off the tray to cool, which I normally do to get the next lot in the oven, then make sure they are somewhere flat or they will cool to the shape of whatever you have placed them on, but really even the side-of-a-plate shaped ones are very tastie.

Golden brown buttons; of course after writing about leaving enough room between biscuits for the 'spread' the next batch I baked stayed in their neat little button shape - 8th November 2011

I personally like the plain biscuits better but am out voted by at least two to one.

Do everything as above until the shaping stage. Then instead of making small biscuits grease a cake tin and spread the mixture evenly across the bottom of the tin, bake until the same golden colour is reached and cool.

When I had a bad wrist instead of mixing everything in a bowl I put it all in the blender, well I don’t have a food mixer, and this chops up the oats and makes a much finer mixture which I think works especially well for the larger ‘biscuits’.

The large biscuits seem to stay a little moister and I suppose are similar to flat-jacks but not as heavy as flat jacks can be.

These can be covered in chocolate too!

I am yet to try adding chocolate chips to the mixture, and I’d like to work out a way of dipping biscuits in chocolates so as you end up with a half-and-half biscuit without have to stand holding it whilst the chocolate cools. I’d also be interested in how replacing wheat flour with either gram or chestnut flour works, and if anyone has already or gets to try these things before me please let me know how it works, but for the moment everything I’ve tried has been a hit.