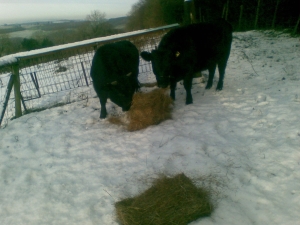 Well, that is Christmas over with for another year, and it passed in an unremarkable but pleasant way. The snow and ice stayed around to make it a white Christmas day but then cleared on Boxing Day to give a few days rest before the four to eight inches of snow that is forecast to fall tomorrow morning reaches us. The week between Christmas and New Year feels a little like limb and seems to last longer than it really is.

On Boxing Day I got up to find that we had had a fox attack during the night, some left dead, two injured and others fine still in their house. Unfortunately I think it was my fault as the door wasn’t done up properly. The two injured ones are in the house by the stove and doing ok.

Other than the fox attack it has all been quite, I got some lovely presents including a jacket and a woven scarf or wrap. I got my new camera but they sent the wrong model, the one up from the one that was ordered, but it doesn’t record sound so it is going back.