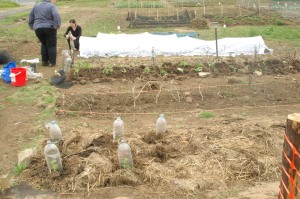 Today has mostly been a growing day. Me, mother, Rhys and middle-younger-sister spent a a good couple of hours at the allotment. The rabbits have eaten down the onion sets, beetroot and leek seedlings which is annoying. I think for the foreseeable  furture then everything is going to have to have some kind of cover on it. I was talking a friend the other day who has been mapping the rabbit population and only two miles up the hill there are no rabbits at all! If only the allotment site was there but it’s not the end of the world.

The brassica netting has been put up, it is net curtainreally but I have read that it works just as well and it is a lot cheaper. I have been hunting through all the charity shops looking for some but haven’t had any luck so in the end bought some from ebay. It looks good, it reminds me of a babies moses basket. The kale plants have had there bottles removed and they look like very nice plants underneath.

We also put the first beans in, all dwarf. It is starting to look very green up there now, under all the net and curtain. At home mother and me and planted out some sweetcorn, squash, courgettes and kale. I also dug up all the docks and weeded all the nettles and dead nettles from in between the spring onions, rocket and chives.

Indoors I have sown more dwarf french and runner beans and put my ‘coloured’ french beans to soak over night. I have also sown peas, it would be so nice to get a crop of these, kale, leek and ‘rabe 60 day’ which is a little bit like purple sprouting but white and is used in Italy as a quick growing crops. The whole of the plant is eaten.

I know most people already have all their sowing done and are just finishing off planting out crops now so in some ways it feels like we are very behind with this years growing session but there is still a lot of time left so I’ve very hope for it. The allotments are filling up fast, inspite of the set backs that there have been with the rabbits and birds, so we will soon but eating well and there is still a lot more to go in too.