The start of spring

This weekend really felt like it was nearing summer, or spring at least. It was warm and felt crisp and fresh outside, lovely weather for working out doors in.

There is still a little bit of snow here and there, in little sheltered spots and piled up in the corners of carparks. 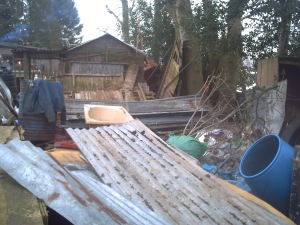 About an hour after we started work

Me and Rhys sorted ‘that pile’ to move the meat chicken house and run so as the new goat house can start going up. When I was little we use to have a rope swing here, hung onto the chestnut tree, but as we’ve all grown up and stopped using the swing (which has now rotted through) this bit of the garden tends to get used as a bit of a storeage area, and not a neat storeage, this isn’t helped by the fact that it’s very close to the garden fence so it’s very easy to pile up tin roofing sheets we’ve been given, etc. ‘until we need them.’ 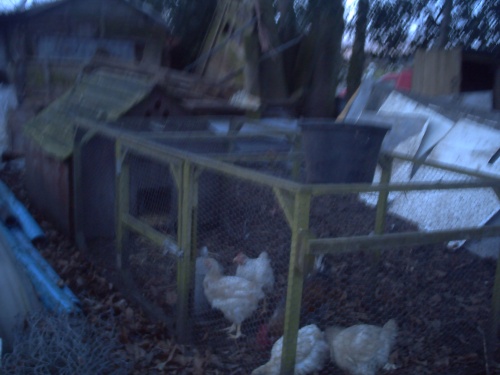 With chicken house and run in place on Sunday evening

By the time we’d finished it didn’t look to bad at all, there are still lots of piles of things, but they are sorted piles now, and we managed to get rid of about 20 sacks of manure through Freecycle as well which helped a lot. Rhys killed his first chicken too, one of the cockerals that was hatched out last summer.

It wasn’t all a good weekend though, on Saturday morning I found one of my new quail dead in the bottom of it’s cage, and then during the day one of the cats, most likely my cat, managed to knock the lid off the brooder and fished out and killed one of the chicks. We also had to rush a sheep to the vets, one of last years lambs, who wasn’t looking right n the morning, was sat all by himself on the green and just looked ‘odd but ran away when I tried to see what was wrong, then later when he came back to the house he was obviously in a lot of pain. The vet couldn’t find a problem, gave him some pain killers and some anti-inflamitries and we kept him in over night. He was dead in the morning. 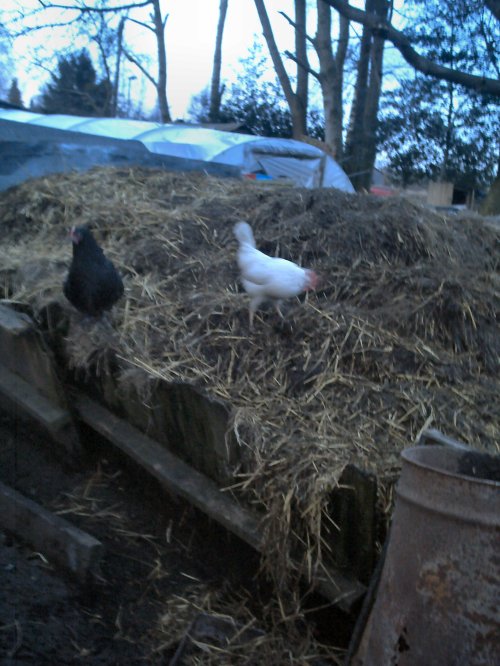 I’ve come up with a plan to get more use and out of the muck heap I’m planning on growing sweetcorn and courgettes on, which at the moment is over flowing and about as tall as me possible even a little taller. So I spent Sunday evening reading all about timings for peas and sweetcorn and have planted a big tray of peas seeds which should just crop before the sweetcorn is ready to be planted out. And if they don’t then we haven’t lost much, I’ve got loads of pea seeds and am using a huge bag of ‘Feltham First’ which was only a couple of quid from Countrywide, so at worst the goats get a really good dinner in a few months. It wasn’t the right moon phase for planting pea seeds so I will plant the other half of the bag in a few days and compare results.

My middle-sisters goat kidded yesterday, a single boy. Lambing next and towards the end of that my goat is due. 2009 is all go already…

2 responses to “The start of spring”